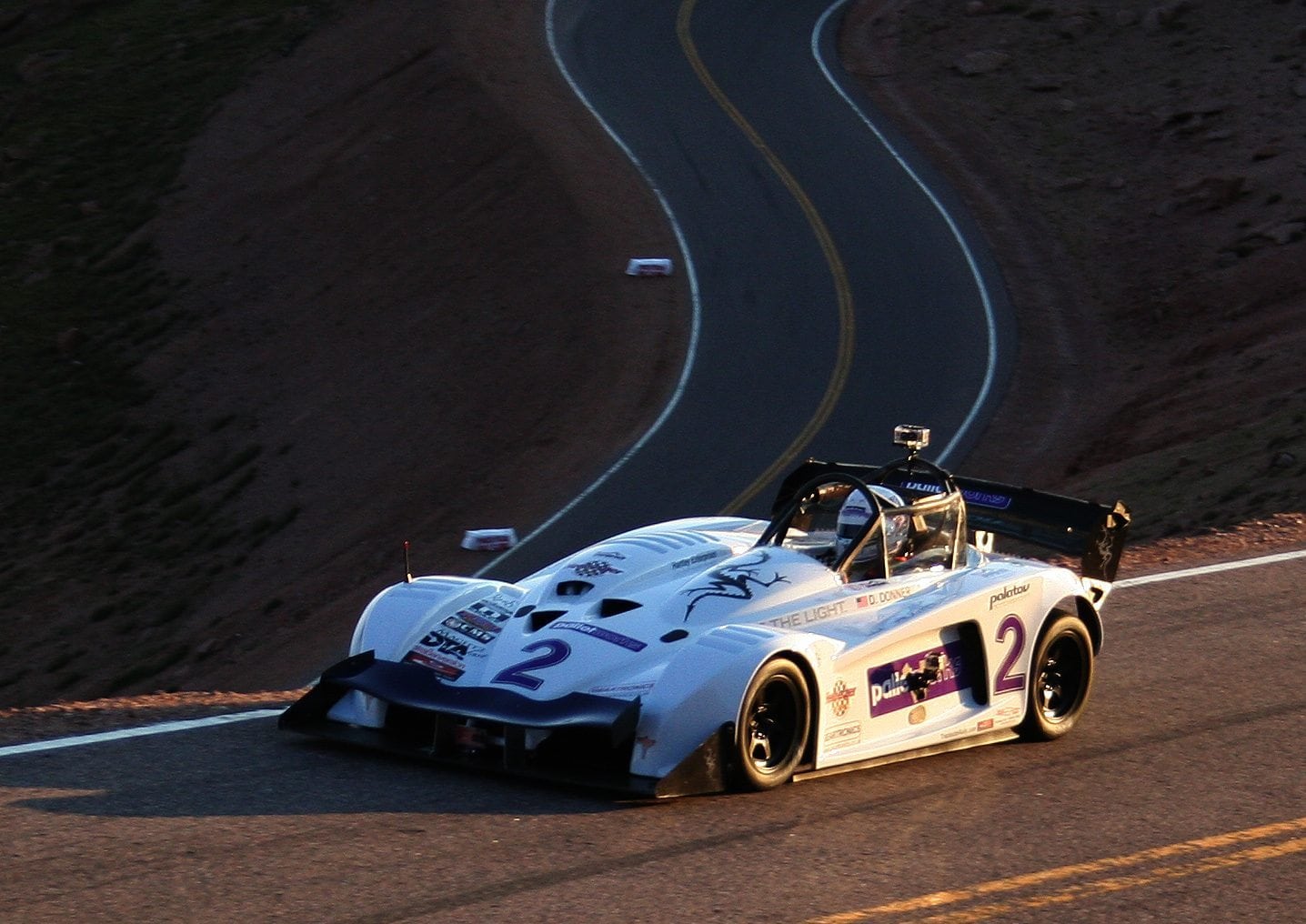 While completely accurate, what that selection of stats fails to convey is just how spine-chillingly fearsome this popular event is. Filled with hardcore, take-no-prisoners corners that are often taken at insane speeds, its drivers are seemingly unperturbed by its blood-curdling collection of blind exits and run-off areas that would be more accurately described as “fall-off areas”.

When Ernest Hemingway observed there were “but three true sports – bullfighting, mountain climbing, and motor-racing”, it’s doubtful he was aware there was actually an event fusing two of those endeavors into one challenging contest. And it’s the enormity of this challenge that brings so many contestants to the mountains of Colorado each year. This year, our good friends at Palatov Motorsport decided to take up the challenge–and this is our account of how they got on.

Not only did Palatov choose to challenge the mountain in 2012, they chose to do it in style, building a brand new car–the phenomenal D4PPS–and entering it into the “Unlimited Class”, a category with the most basic set of rules and regulations that, effectively, allow teams to race whatever they like as long as it meets the necessary safety standards.

Check out the video below to climb on board a hair-raising D4PPS test climb.

The Peak is a daunting task for anyone to take on, let alone in the short amount of time the team had to design, build, test, and develop the car! With this in mind, I asked Dennis Palatov, CEO of Palatov Motorsport, what it was that brought them to the “Race to the Clouds”:

Our track cars are purposefully designed to rewrite the rules–lightweight, powerful, AWD with innovative aero. The Unlimited Class at Pikes Peak does not restrict technical innovation in any way; the only rules are safety-related.  It is the perfect venue for us to test our approach and compare it, no-holds-barred, to some of the best international competition. In track days, there is no formal competition and it is hard to ‘validate’ performance versus others. Yes, our cars are fast but how fast?  Of course you can compare our cars in Simraceway to any other car in the sim, and see for yourself but it is still a virtual comparison. We wanted to step up to a formal challenge, without being hindered by class-specific rules and against international competition. Pikes Peak has been a long-time dream and when we got connected with David [Donner–multiple Pikes Peak champion] I realized this was the opportunity that was not going to come easily again so we decided to make the leap.

Once you had decided to take on the 2012 Pikes Peak Challenge, where did you begin with the car?

This year’s effort was done on a very limited, ‘crowd funded’ budget.  We therefore originally chose to start with the lower-cost D4. As the project progressed, we were able to move to the longer D1-based chassis and eventually a D1 owner (Karl Asseily) sponsored the effort by loaning us the engine from his car, because the timing and funds didn’t allow the completion of the turbo 4-cylinder we were planning on using in time for the race.  We ended up running the normally-aspirated V8 (in effect making it pretty much a D1) but the lack of forced induction put us at a big disadvantage at 14,000 feet.

What kinds of changes did you have to make to the car to ensure it coped with the unique stresses and strains of Pikes Peak?

The D4PPS is a combination of several of our technologies (this is the modular platform at work). In reality it is closer to a D1 than a D4–not necessarily by original intent but more as a result of how the project progressed.  The most obvious Pikes Peak-specific modification is the addition of a roll cage, to meet PPIHC requirements.  Another is the increased ride height, to deal with the uneven pavements. Together these two items had a very significant effect on aerodynamics. Another important addition was a Geartronics electronic paddle shifter–it made a huge difference in being able to be in just the right gear at all times, minimizing the effect of power loss at altitude.

We know you had limited time, so what were your goals for the preparation of the car and how close did you come to achieving them?

This year we were limited by both time and budget. Our initial goals were 900 lbs weight with AWD, 350+ hp at start line with a sequential paddle shift transmission and about 500 lbs downforce at 100 mph. We had gotten quite a ways down the road in development of a turbo 4-cylinder that would have allowed us to come pretty close in all regards, but we ended up running with a borrowed normally-aspirated V8. Also we did not have a chance to optimize the weight as thoroughly as we would have liked. What we ended up with was 1,200 lbs wet weight, about 280 hp at start and 450 lbs downforce. We were able to get the sequential box and paddle shift working perfectly, which helped a lot.

The number one thing you need at Pikes Peak is reliability. The Unlimited Class cars are crazy beasts, pushing the very limits of what is possible, and the Pikes Peak course is a very demanding environment, both in terms of altitude (which affects much more than just power) and the road surface itself. Just because it’s paved doesn’t mean it’s like a typical racetrack. David has driven the course in many configurations over the years and, in his opinion, it was in many ways easier to drive when it was not paved. It was wider and more forgiving than the new fully-paved surface.

Dennis went onto explain that, besides reliability, you also need a good a power/weight ratio, a healthy downforce/weight ratio and very good power/drag in the 10-150 mph range (although he admitted that they hadn’t quite nailed the last bit as they topped out at 117 mph (still not a bad speed when you’re driving up a mountain!).

So with the car nearing completion, what was the next stage of your preparation? Where did you test your new creation?

We are fortunate to have a great relationship with Oregon Raceway Park.It’s a challenging course with big elevation changes and makes a great testing venue in preparation for Pikes Peak, so a lot of developmental testing took place there, and aero testing we did by renting an airport runway. David came out to ORP for some initial evaluations, but a lot of the time I had to be the test driver in early development.  This presented a unique challenge because the car is so much faster than I am–it really takes a driver of David’s calibre to fully exercise it, let alone explore the limits. And yet I had to push it hard enough to stress the systems being tested (and avoid going off the track!).

We also did some testing at the actual Pikes Peak course in June; this was three days after the car was put together!  We participated in a private test which was a unique opportunity to try a full run (something not allowed in official testing, which is done in sections).  It was a huge learning experience and really opened our eyes to what the mountain is about. There was additional official testing right before the race, also done in sections. David did all the driving on the mountain. He is great to work with–not only is he obviously talented and highly-skilled, he also has a methodical approach and knows when to push and when to back off and preserve the equipment. His experience and feedback were a huge help in development and of course his drive in the race is what ultimately delivered the results.

And what a result it was! With minimal time and a shoestring budget you managed to win the Unlimited Class, finishing only 18 seconds off the all-time record! How do you follow that?

If we run next year it will definitely be with the goal of capturing the overall record!  We think the competition will be much faster next year and the time to beat will most likely be below 9:30, but we believe we know what it’ll take to do that with our car.

So there you have it, Dennis Palatov and his team continue to beat the odds with their awesome cars–and if they do choose to take on “The Race to the Clouds” next year, Simraceway will be following them all the way!

In the meantime, if you want to learn more about Palatov Motorsport and their 2012 challenge, read their blog. And if you want to get a taste of what David was experiencing at the wheel of an ultra-light, super-fast Palatov car, just log in to simraceway.com and choose one from our selection. We guarantee you’ll be grinning from ear to ear!