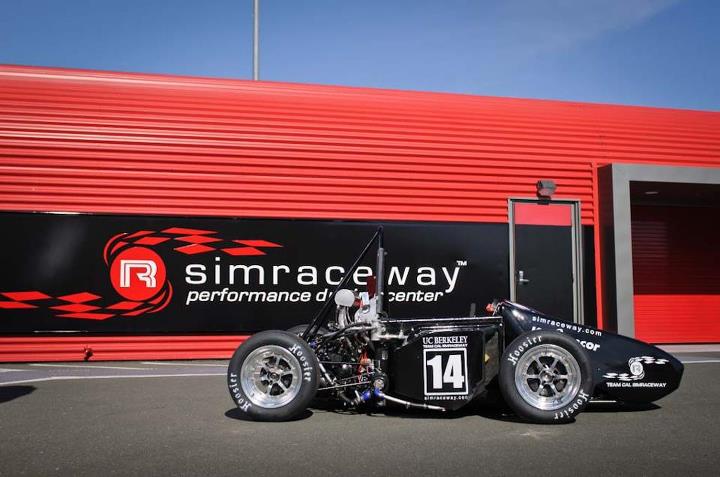 Team Cal Simraceway Gear Up for Their Biggest Challenge Yet

Simraceway has partnered with the Formula SAE team at UC Berkley to assist its budding engineers and drivers as they develop and race their B12 car in the 2012-2013 season. In a previous post we covered the early stages of their preparation, including the all-important driver selection, and we now join Team Principal Shin Scott and his FSAE team as they continue to ready the car and drivers for the grand final in Nebraska.

The development of the car had been ongoing whilst the drivers were being selected and once it was completed, the team fired it up for the first time and made some runs down the nearest straightaway.

There was still a lot that needed to be done but producing a running car was a big milestone for the team–a milestone that had given many of them sleepless nights as they battled to reach it.

Before any testing of the B12 went ahead, the team had its annual open house event where it got to show off its achievements. Both the B11 and B12 cars were on display, along with simulators running Simraceway, in the hope of getting a new generation excited about motorsports.

The event proved to be a success, with hundreds of would-be Cal students, parents, and alumni stopping by to ask questions and try out the game. Plus the guys got to fire the car up, rev the engine, and shake the windows of the engineering building.

Next, the team visited the Simraceway Performance Driving Center to take part in the “Real vs. Virtual” shakedown of the B11, now available to buy on Simraceway. It was also an opportunity for them to work with Simraceway‘s head of physics, Nico Rondet, in order to find out how they could improve the handling, braking, and stability of the B12.

Nico was impressed: “It was fun to help the guys discover a few things about their car. I could feel the tension, even when I was looking at the suspension parts, and the general build of the car. I was in fact admiring the clever designs and creations that they had come up with. The setup responded well to the changes we decided to make, which is always a good sign. We played with suspension geometry, suspension settings, engine tuning, and data acquisition. They were ready to dive head first into anything I threw at them, which was great to see.”

It proved to be a great day for the team, with Shin explaining that it gave his team a real morale boost: “Seeing the car out on track, being driven to its full potential was great. Nico gave us some very good tuning tips as well–tips that we plan to use to our advantage in the competition.”

Having sorted the handling and engine setups, the team then focused on driver training. Shin explained their methodology: “Since the karting, we have done most of our driver training in the B11 and B12. We made sure to alternate drivers between test days to keep the seat time evenly spread. Later in the testing schedule, as we worked out the bugs in B12, our drivers got a good amount of seat time running mock endurance events. We used the data acquisition system to give the drivers feedback on how they were doing, and in the end our drivers got far more useful seat time this year than in previous years.”

The competition itself involves around 80 teams from across the world and is about much more than simply racing. In fact it’s more of an engineering competition, which just happens to be centered around racing cars.

“Of course, many of us do it for the racing!” admitted Shin, “but the lessons learned at the end apply to all engineering fields, and that is part of what makes FSAE so widely appealing.”

The competition itself is split into two sections: static events and dynamic events.

The static events are the designs, cost reports, and business presentations the team submit to the organisers. Shin describes each aspect: “In the design event, a panel of judges looks over the car and talks to the designers about it to see how well the students understand the engineering behind it. The cost report assesses the production cost of the car, based on a theoretical production of 1,000 cars. The business presentation is an event where we make a business case for producing and selling our car.”

The Dynamic events, meanwhile, mark the start of the action on the track, with acceleration, skid pan, autocross, and endurance tests. Shin: “The acceleration and skid pan events measure the longitudinal and lateral accelerations of the car, while the autocross event measures its overall performance. The endurance event is a 22 km race, with fuel economy an important factor.”

Each event has a points total assigned to it, and achieving a certain position in that event nets a corresponding number of points. At the end of the competition, whoever has the most points is the winner. One of the exciting things about the competition is just how diverse the field of cars is. Because the rules are so open, there are few ‘cookie-cutter’ cars, and most schools bring something unique. There are cars with and without aero packages, with single-, twin- and four-cylinder engines, with 13″ and 10″ wheels, with carbon-fiber monocoques and steel tube frames, and they’re all there competing with each other on the same stage!

We look forward to what is sure to be a fascinating final in Nebraska and wish the team the very best of luck for the competition! Check back here for updates.