March saw the IMSA racing season take on Sebring International Raceway, a track that started as a US Army Air Force base during the second world war and moved on to host the first ever F1 US Grand Prix — but it’s mostly known for holding one of the top endurance races in the world.

The 12 hours of Sebring has been running since 1952 and is a top stop for any endurance racer. This challenging 17-turn track has it all — from punishing bumps and high speed sweepers to tight hairpins and perilous sections when the rain hits. Simraceway was well represented in the weekend with Michael Wheldon making his debut in the IMSA Pro Lites series, Matt Bell once again behind the wheel of the Stevenson Audi in GTD, as well as several drivers in the Continental Tire Series.

Here’s some updates on how the weekend went for them. 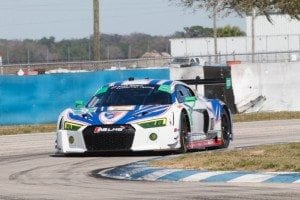 Matt Bell, teamed with Lawson Aschenbach and Dion von Moltke in the No. 9 Stevenson Motorsports Audi R8 LMS for the 12 hour race.

A disappointing qualifying session saw the No. 9 machine start from 11th.To top that off, they also had to replace the gearbox the night before the race.

Race day for the 64th annual Mobil 1 Twelve Hours of Sebring Fueled by Fresh from Florida dawned bright and clear. Unfortunately, the weather did not hold and made way for an uncharacteristically wet race day providing a unique challenge for the entire paddock, but one for which the Stevenson Audis were more than prepared.

Although the second round of IMSA WeatherTech Championship competition marked just the second outing for Stevenson in their new Audi machines, the 2015 IMSA Continental Tire SportsCar Challenge Championship winning team proved its mettle as they fought through the changing conditions and sailed through a deluge with No. 9 Audi machine running in the top-10 as track conditions deteriorated to the point that IMSA red flagged the race for over two hours.

They showed strong pace early in the race and remained in podium contention for a majority of the endurance classic. Despite an afternoon deluge, all three drivers fought through it all and at a couple of points in the race led the field. Unfortunately, an engine issue with just under 3 hours remaining in the race forced the No. 9 machine back to the garage where the condition was diagnosed to be race-ending and the crew had to accept a 16th place finish.

Matt Bell said of his race – “Obviously this was not the night we were really hoping for. I was kind of still getting up to speed; I wasn’t as used to the track in the dry on the bumpy track. I was driving along and I got doored by a Lamborghini and got caught in some traffic and I was really on my own then. So I was driving through Turn 13 and everything was fine. Then I entered Turn 14 and the car went down on power. When I backed out of it, I looked in the rear-view camera and there was a huge flame coming out of the back pipe. It didn’t look like a big air-fueled fire so I knew the bodywork wasn’t on fire. I figured it was coming out of the exhaust, so I backed off a little bit, but I didn’t want to let the engine stall because I figured I was running on one bank. So I drove it back to the pits on one bank and tried to keep the speed up so the bodywork wouldn’t catch fire and brought it into the pit and they diagnosed it as a stuck injector which blew out the left side catalytic converter. So it’s unfortunate, but it is what it is. It’s a long race and we are still working out this car. The car was doing great in the wet. Honestly it’s odd that I was more comfortable in the wet than in the dry. So a bit of a disappointing day, but we will collect ourselves and head on to the next race.” 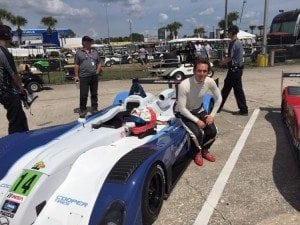 “We just finished rounds 1 & 2 of the Mazda Prototype Lites presented by Cooper Tire championship at Sebring International Raceway.  This was my first time in the Elan DP-02 with the Mazda MZR 2.0.  I have raced Pro Mazda before which is the same tub as the DP-02, but that’s where the similarities end.  The DP-02 has a wider track, and larger front tires.  The car also has a full tunnel design underneath which creates double the down-force.  All I can say is the car is an absolute blast to drive.

These first rounds were also my first time racing at Sebring.  Most told me it was bumpy, and the track definitely delivered.  I ran with World Speed Motorsports and we showed up last second to the race do to finalizing my funding.  We were behind the eight ball when we showed up.  Thankfully the team did an excellent job and we slowly found our pace and set up as we did testing.  A small gearbox problem ended our test day early, but we knew where we could find speed.  The next day was just practice, and we made more changed to the car and continued to find more pace.  Then came qualifying and we thought we had a good shot at a top five, however, a shortened qualifying do to a accident put us P9.  I knew it was going to be a good race though, as I was up 1.7 seconds when the red flags came up.  We defiantly had the pace of the front runners, just needed some track time.

Round 1 started and I passed three cars in the opening corners.  I then passed another a couple laps later, at this point I had some real estate to reel the top four in.  I put in the second fastest lap of the race here, and with three to go made a move for P4.  We were super happy with a P4, and even more exuberant with a front row start for round 2.  Round 2 has a 45 minute four car race for the lead.  After a couple of late yellows I took home P3 and my first podium in the series.  Such an incredible weekend to show up with no knowledge of the car or track and end up with a podium.” 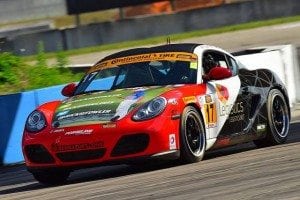 Nick & Spencer were ready to capitalize on a runner-up finish at Daytona with another strong performance at Sebring. Hopes were high after practice where the No. 17 Legistics/RS1/RickieFowler.com Porsche Cayman seemed to handle the Florida heat better than the other ST entrants.

Nick Galante qualified the Cayman in seventh and was doing well at the start of the two-hour race when he reported trouble with the handling of the car. The crew determined that a slight bit of contact with another car had broken the Cayman’s sway bar drop link. This resulted in a large amount of oversteer.

Galante held on and brought the car in for its scheduled pit stop and driver change to Pumpelly. Not long after taking the reins, Pumpelly was going head-to-head with another Cayman when he suddenly lost the ABS.

“As a driver, when you assume you have ABS, you’re hitting the brake pedal pretty hard,” Pumpelly said. “In the Cayman, without ABS, all the brake bias goes to the rear. As I was trying to recycle the ignition and the master to get the ABS back, I got the car to shut off. It took me awhile to get the car going again; I was doing my best PC car impression out there. In the process, we lost a couple spots, but I nursed it home.” 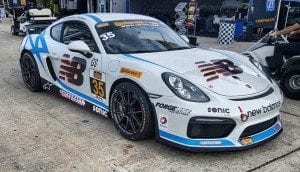 Tyler took a week off from jumping trucks in the Robby Gordon Stadium Truck Series to compete in his first Continental Tire series race of 2016 with the CJ Wilson Racing Porsche Cayman GT4 alongside teammate Till Bechtolscheimer. After Till started a fine 6th place, Tyler took over for the closing stint & was involved in a tight battle for 3rd but wasn’t able to make a move in the last laps and had to settle for 5th place in the end. 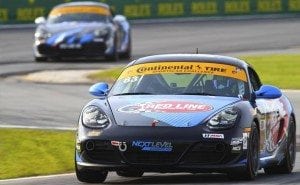 “Our race went well with a P8. We got a lot of points to currently hold 4th in the standings and it sets us up for a good start of the championship. My co-driver, Ari, is making big strides every race in his first pro season and having only started racing a little over a year ago. He drove from P17 to P13 which is very good and proves our progression is on target. The guys at Next Level European did a great pit stop and I got out in 11th. From there it was a survival race with the track being as hot and greasy as it had been all week. Up next is our home race at Laguna, we know the MX5s will be out of touch but we’ll shoot for a win in the Non-mx5 class.” 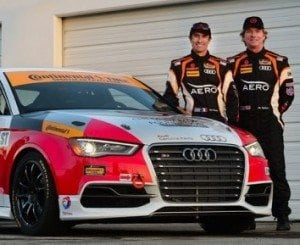 “We had high hopes to return to Sebring with a much improved Audi S3… and it was, but we still were having some minor transmission issues, and the biggest problem, is that right now, our Audi is just too slow. The closest to the front we could get was about 2.5 seconds.

Then in Qualifying, Jim was surprised by one of the Mazdas’ which was off in turn 1, as he tried to avoid it, he lost the car, and ended up hitting the wall, hard enough that we could not take the start the next day. Jim was a little bit sore, but mostly fine. He did succeed in avoiding the stranded Justin Piccitel who he would have T-boned!

Not what we were hoping for, but we will fight another day!”