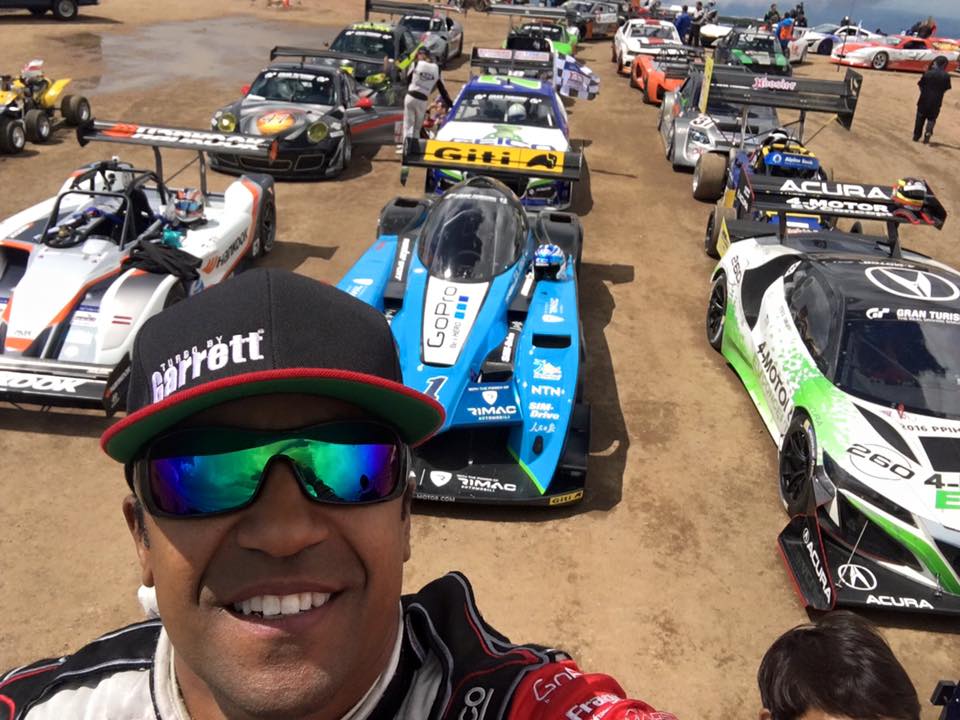 By Jonathan Haswell In Instructors

First thing is first, I made it to the summit safe and sound! My crew guys (Mark Misegadis, Bob Campbell, Mark Pawlowski, Austin from Pikes Peak Racing) were great prepping the car and everything seemed ready to attack the mountain. The weather was also epic!

(Now comes the “could a’, should a’, would a’ part! ?). Little did we know the weather was maybe too good as the asphalt was getting hot at over 115 degrees when I took my run up the mountain (around 12-12:30pm I think). Using tires warmers before any run was status quo, however it turned out my tires were too hot (relative to the ambient and road temp) as I was sliding more then I ever had from previous practices. Granted it was the hottest day we had all week, no one thought it would be that “bad”. Other drivers, and riders experienced some of the same issues.

I had to dial my aggressiveness back a bit during my run as I managed grip right from the start. As I push my car harder, I keep an eye on engine temp. It’s climbing (as expected). However, it climbs more then I expect. Temps are cresting 240, 250, 260+ degrees by half way through the middle section. Car begins to loose a majority of its power as the water is spewing out of the cap in the engine bay and I begin to seriously nurse the car to the finish. Come hell or high water (or low water in this case, lol) I was determined to make the summit! I kept an eye on oil pressure to make sure I wasn’t loosing oil (especially on track) but have to bring my speed waaaay down to maybe 50mph for something like the last 3-4miles. After looking at in-car footage (which I will post) I was at least 45 seconds slower then my practice time for the upper section and at least 15 seconds slower in my middle section.

My final time to my amazement was still an 11:02! I honestly figured a 12-13 min time as completing the run felt like days! Safe to say my pace was deep into a low 10 min run if not a high 9 min time. 10:00 min flat was the winning time this year (David Donner: Pirelli WC Porsche GT3R) for Time Attack 1, so a win if not at least a podium for my first full run up the mountain was very likely!, but as they say “it is what it is”. The problems we need to fix are easy to resolve and should give me what I need to take another fast run up the mountain next year!

We never get a full run up to the summit during normal practice so it was hard to determine if we would have cooling issues on race day. Though we only run sections in practice, we never had issues with cooling. I am exhausted to say the least (just got home after a 27hr straight drive back) after long days and nights during the race week. Pikes Peak always seems to find a way to get you to come back for more! I will be doing that very thing! Already got the list of changes to the car in front of me!

Thanks to all my amazing sponsors, friends and family for your support and sending all the good vibes! Until next year!…